Is your business facing the challenge of creating a modern, high-performance web application that is user-friendly and attractive to your customers, regardless of their platform? Do you want the development to be cost-effective today and your software product to have good prospects in the future? Do you value reliability and trust in what has proven itself in practice?

In this case, UI development with Angular framework tools is the best and most profitable solution. We will tell you in this article why it is so. After getting acquainted with it, you will get a general idea about the features of the technology and learn how to find and hire Angular developers able to realize your needs in the best way.

Angular vs. Angular.js developers: differences to keep in mind

Angular is an open-source front-end development platform for web applications. It is used to create dynamic and cross-platform user interfaces for SPA and mobile applications of various purposes.

The first version of the framework, now known as Angular.JS, was created in 2009 and was intended for programming in JavaScript, extending the capabilities of browser applications based on MVC patterns and simplifying testing and development in general. With the latest version, 1.8.3, in April 2022, official support for Angular.JS has ended, though it is still in demand among programmers and their customers.

In 2016, developers from the Google team introduced a new version of the platform – Angular 2.0 with a fundamentally different architecture and coding in the modern TypeScript language, which eliminates some drawbacks of JavaScript and accelerates both the development and debugging process and the speed of program execution. The second version of the platform and its subsequent releases (the current version is 15.0.4) are united by the common name Angular, thus emphasizing the independent development of this branch of technology.

At this point, Angular.JS has already been an outdated technology with limited capabilities compared to the Angular platform. Of course, to support the web projects created with Angular.JS, the experts of this framework will be in demand for a long time. However, if you plan to develop a new software product, today it’s better to prefer Angular.

What are the benefits of Angular over its predecessor? 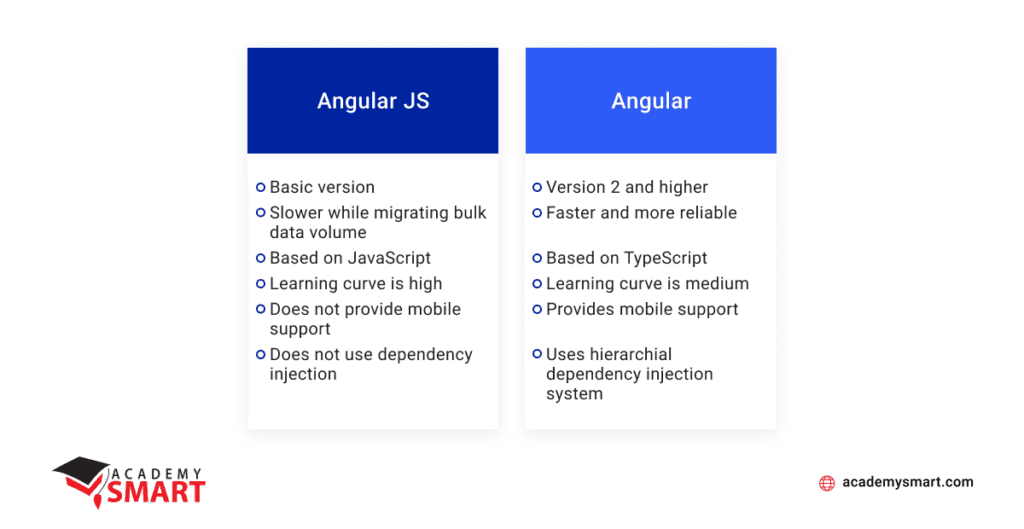 Differences between Angular.JS and Angular technologies

Reasons to hire an Angular developer

Today Angular is one of the most popular client-side software development platforms. There are over 330 thousand websites based on it, among which most belong to owners from the U.S., Western Europe, and developed Asian countries.

As of the beginning of 2023, Angular steadily holds the 5th place among the most popular JavaScript frameworks, creating an optimal environment for more than 20% of web developers worldwide, including Academy Smart. Of course, it may seem that it’s not the strongest argument to hire exactly Angular programmers for your project. However, Angular is designed primarily to develop complex and dynamic enterprise web applications. At the same time, more popular frameworks are capable, more often than not, of narrower tasks and lower performance. Not surprisingly, Angular is used in the most technologically advanced and trendy industries, such as blockchain, decentralized applications, meta-universes, etc. Of course, Angular is also actively used by Google itself in its services, like Google Cloud Platform or AdWords, and others.

Angular has been used to create software in finance, e-commerce, engineering, real estate, media, and other areas. It helps to develop a wide variety of web applications:

Choosing Angular as the front-end solution for your software product will meet your business’s challenges at the most advanced level.

Angular proves its efficiency not only by the speed of program execution. It can easily integrate with other popular UI development tools and libraries, such as React, Falcor.JS, Meteor, NativeScript, ReactNative, etc. On the one hand, that expands the framework’s capabilities in creating cross-platform applications. On the other hand, it significantly saves the cost and time of development.

It is not surprising that Angular- and React-based stack was chosen for the potentially dangerous situations and incidents management application that our company developed from scratch for a large production company. Academy Smart developers used it to create a dynamic application interface for different types of users with diverse and comprehensive threatening event analytics and a database of instructions on preventing them. The Safety Dashboard application’s usability, stability, and scalability have returned the customer’s investment after being implemented in manufacturing practices at several large European plants. 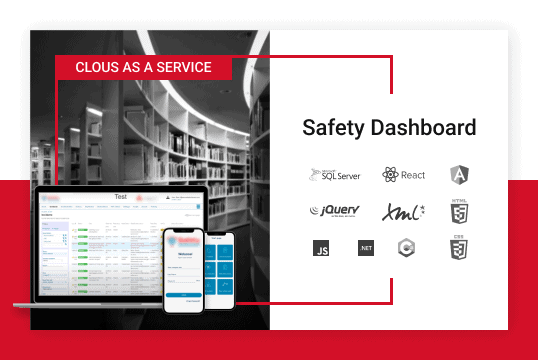 Enterprise application based on Angular, developed by Academy Smart

Finding a good Angular developer is worth having a clear concept of the professional knowledge and teamwork skills he should have. Of course, you will be able to appreciate them well if you have the relevant technical background and the skills of a proficient recruiter. If you don’t have enough time or experience in organizing developers’ workflow, you can always hire a dedicated team for your project. How to do this, we described in the article How to Hire an Offshore Development Team earlier in the blog.

The minimum requirements for a successful hiring of Angular developer are:

This level of expertise involves strong full-stack developer skills, project management proficiency, and the ability to find effective software solutions in complex situations. As an expert, the Senior Angular developer ensures the quality of the software product code and familiarity with the best practices to his less experienced employees.

As Angular becomes increasingly popular, finding a good specialist is difficult and sometimes costly. It’s not enough to place an ad in the local newspaper to hire an Angular developer with the required qualifications. As a rule, proficient programmers don’t read them because they are busy with other projects. In addition, an experienced Angular programmer may not be within reach, and hiring an unskilled coder will only increase the final cost in time and money. Therefore, finding and hiring a competent employee requires precise planning and following this plan’s points. Alternatively, it’s always wise to enlist the help of specialized staffing specialists to recruit an Angular programmer quickly, and it’s worth the investment.

1. Define the project requirements for the candidate

Careful attitude to your project will show you what professional skills an Angular developer must possess and to what extent. The project specification will also indicate the additional experience that can be useful for the programmer and become his advantage over other applicants. You should also think over and organize the list of soft skills of the developer to fit the spirit of your team. In the end, you should have a list of skills and an interview questionnaire with tasks that could validate these skills.

Next, you should determine whether you need a full-time or remote employee, and for how long. Depending on the tasks that the project has for Angular programmers, you may be satisfied with a freelancer, outstaffing developers, or you may need an entire outsourced team. Which hiring model you might prefer is described in more detail in our guide Outsourcing vs Outstaffing: What To Choose?

The next step is to decide where to look for the specialists you need. You can turn to professional communities on social networks, to the freelance market, or to companies that provide software development services. Each of these solutions has its pros and cons, which we’ve discussed on the blog many times before.

In addition, you are not limited by territorial affiliation because professional Angular programmers from distant countries often perform tasks no worse than the native ones but also significantly cheaper. Below you will see how different Angular developer fees are in different countries. And you may draw your conclusions about the possible additional benefits of hiring offshore Angular developers.

In the end, you should have a list of platforms where you will look for the specialists you need. The main thing is to define the search space clearly; otherwise, it can last unacceptably long.

3. Conduct the interview and technical screening

The most complex and responsible stage of selecting the right specialist is a personal acquaintance, interview, and skills testing. Since you need the best Angular programmer who will do the work on the project with quality and on time, you can’t trust the will of chance. It would help if you had personal competence in the subject matter or someone who can provide competent assistance in evaluating potential candidates.

Experts who are engaged in software development themselves do this best. Therefore, trusting professionals to find Angular developers and check applicants’ hard skills is prudent. Here are some examples of software that Academy Smart’s programmers created.

Finally, you will be left to choose the most worthy from the list of successfully interviewed candidates.

To estimate the total cost of hiring an Angular developer, you should consider the following:

On average, the annual salaries of full-time Angular programmers at the beginning of 2023, depending on the region, according to Salary Expert service, are as follows:

When hiring outsourced Angular developers, one hour of specialist’s work will cost you:

Why hire an Angular developer with Academy SMART

Academy Smart is a company that has been in the custom software development business for over 13 years. To have the necessary resources and to do our work in the best way possible, our recruiters are constantly looking for and attracting skilled and proficient specialists in different IT disciplines to join our team. Since we recruit for our company, we take a sensitive approach to interviewing candidates and assessing their expertise. Primarily, in order to provide our clients and us with the best programmers available in Ukraine for the money.

Cooperation with Academy Smart will free you from the routine of searching for Angular developers, HR support of the working team, and monthly salary payments. When you entrust us to participate in your project, you get competent experts of the necessary specialties or a strong development team in the shortest possible time and for reasonable money. Our developers have the knowledge and skills your business ideas require. Let’s start talking to clarify your necessities.

Where to find an Angular developer?

You can find Angular coders on freelancer sites, review platforms, or software developer ratings. You may also contact a private recruiting agency or an IT company that provides an outstaffing service.

What are the factors that affect the cost of hiring an Angular developer?

The cost of recruiting an Angular programmer is heavily influenced by practical experience, level of expertise, hiring model, country of location, etc. 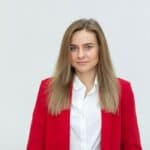 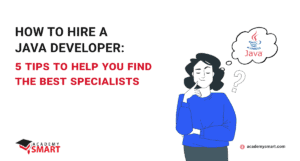 How to hire a Java developer: 5 tips to help you find the best specialists

How to hire a Python developer: 6 best tips
Subscribe We promise not to Spam :) We send our news and updates not more than once a month.

You're on the wrong site!